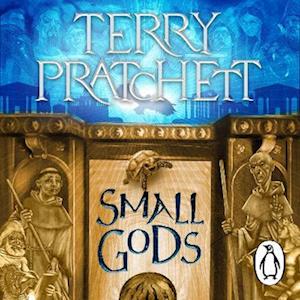 Brought to you by Penguin.The audiobook of Small Gods is read by the BAFTA award-winning actor and director Andy Serkis (The Lord of the Rings; Planet of the Apes; Star Wars), with BAFTA and Golden Globe award-winning actor Bill Nighy (Love Actually; Pirates of the Caribbean; The Hitchhiker's Guide to the Galaxy; Harry Potter and the Deathly Hallows) reading the footnotes, and with Peter Serafinowicz (Star Wars: Episode I - The Phantom Menace; Shaun of the Dead) as the voice of Death. Featuring a new theme tune composed by James Hannigan. 'Just because you can't explain it, doesn't mean it's a miracle.' In the beginning was the Word. And the Word was: 'Hey, you!' This is the Discworld, after all, and religion is a controversial business. Everyone has their own opinion, and indeed their own gods, of every shape and size, and all elbowing for space at the top. In such a competitive environment, shape and size can be pretty crucial to make one's presence felt. So it's certainly not helpful to be reduced to appearing in the form of a tortoise, a manifestation far below god-like status in anyone's book. In such instances, you need an acolyte, and fast: for the Great God Om, Brutha the novice is the Chosen One - or at least the only One available. He wants peace and justice and brotherly love. He also wants the Inquisition to stop torturing him now, please . . . The Discworld novels can be read in any order but Small Gods is a standalone novel. 'Deftly weaves themes of forgiveness, belief and spiritual regeneration' The Times(c) Terry and Lyn Pratchett 1992 (P) Penguin Audio 2022