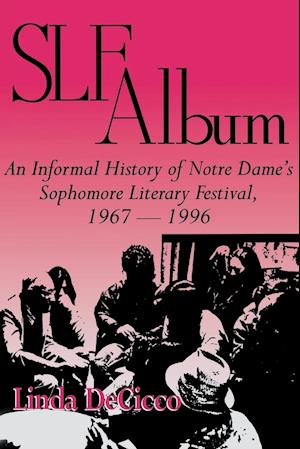 The SLF Album is the first comprehensive story of the University of Notre Dame's Sophomore Literary Festival. This portrait focuses primarily on the literary giants whose presence has made this festival one of the nation's most esteemed. It also gives us a fascinating, behind-the-scenes look at this thirty year-old phenomenon which has always been organized, coordinated, and managed by students.

Established in 1967 as a week-long Faulknerian festival, in 1968 the Sophomore Literary Festival came into its own with a series of readings and workshops by some of the country's most prestigious writers, including Norman Mailer, Joseph Heller, Kurt Vonnegut, and Ralph Ellison. The precedent set in 1968 became a legacy which has carried through to 1996, and DeCicco's portrait presents each year as its own chapter. equal on importance and prestige to all previous years. In addition to providing excerpts from the writers' readings and lectures, DeCicco describes the sophomore committee's author selection process and events which shed light ion the fame and foibles of many literary greats.

DeCicco's success in portraying the participating internationally acclaimed authors, who include Margaret Atwood, Allen Ginsberg, Arthur Miller, Robert Bly, Tennessee Williams, Joyce Carol Oates, Edward Albee, Susan Sontag, Gloria Naylor, is uniquely tied to the intimacy of the Notre Dame setting. Her record encompasses the mythical images of these world-renowned authors in the context of a modest student-run festival at a midwestern private university. This comprehensive history is important and fascinating reading for all who have experienced the magic of Notre Dame's Sophomore Literary Festival, as well as for anyone interested in the arts.