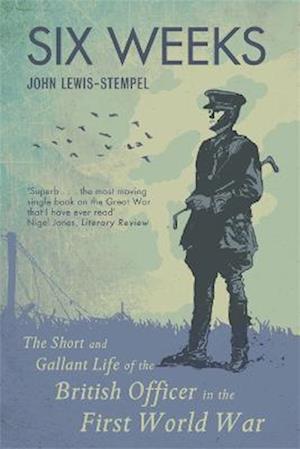 The extraordinary story of British junior officers in the First World War, who led their men out of the trenches and faced a life expectancy of six weeks.During the Great War, many boys went straight from the classroom to the most dangerous job in the world - that of junior officer on the Western Front. Although desperately aware of how many of their predecessors had fallen before them, nearly all stepped forward, unflinchingly, to do their duty. The average life expectancy of a subaltern in the trenches was a mere six weeks.In this remarkable book, John Lewis-Stempel focuses on the forgotten men who truly won Britain's victory in the First World War - the subalterns, lieutenants and captains of the Army, the leaders in the trenches, the first 'over the top', the last to retreat. Basing his narrative on a huge range of first-person accounts, including the poignant letters and diaries sent home or to their old schools, the author reveals what motivated these boy-men to act in such an extraordinary, heroic way. He describes their brief, brilliant lives in and out of the trenches, the tireless ways they cared for their men, and how they tried to behave with honour in a world where their values and codes were quite literally being shot to pieces.

Forfattere
Bibliotekernes beskrivelse The extraordinary story of British junior officers in the First World War, who led their men out of the trenches and faced a life expectancy of six weeks. 30