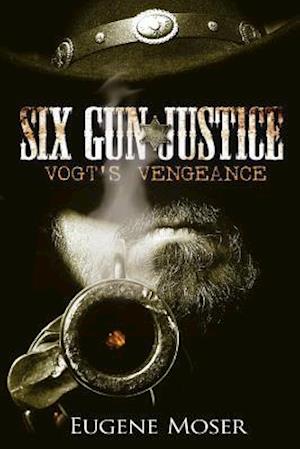 The book titled 'Six Gun Justice' is a fictional account of the life of the main character, JimVogt. The story begins with Jim and his father are off hunting and a tragedy happens to hismother and brother. A group of evil men rapes and murders the mother and takes Jim'syoung brother Peter off to sell into slavery. Jim is sent to his uncle Martin to live, while thefather tries to track down the evil men. Fifteen years later, while living in Texas, tragedyagain strikes Jim's loved ones. His pregnant wife is raped and murdered and he sets out ona trail of revenge. It takes a long time, but he tracks down the criminals and metes out hisown brand of justice on them. On his travels he meets and falls in love, and meets someonewho knows his brother. He settles down with his new wife and one day his long lost brotherappears at his door. He stays with Jim for a period of time. He then sets out on his own andmarries. He takes on the job of sheriff. He has some trouble with a local rancher and callson Jim for help. Peter and his wife then travel to California. At this time Jim receives aletter from his long missing father, who happens to live in California. Jim is able to contactboth his father and brother and arranges for them to return back to his ranch. The familyis reunited and a new generation of'Vogts' is started.