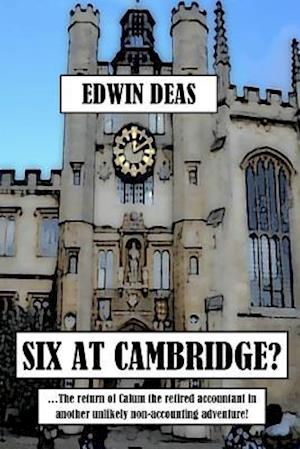 Six at Cambridge? sees the return of Dr. Calum Davies, a recently retired accountant and academic, in a series of adventures, which of course he did not set out to find, they simply found him, just as they did in Crises on The Cumbraes. For over seventy years, there has been debate about the Soviet spies who came together at Cambridge University in the 1930's. Just how many were there? Calum is unenthusiastically enduring a six-day stay in Cambridge while his wife Nerys is attending an important career-enhancing conference and symposium at Trinity College. He stumbles into a mysterious woman of Eastern European extraction, Christina Novotna-Sandusky, who is engaged in research into the spies, having recently learned from her mother on her death-bed that her father was Donald Duart Maclean, one of the notable spies. She is alarmed to discover that she is being tailed by two men and separately by another and persuades Calum not only to assist in the research but also to provide protection. Her annoying habit of going missing as she tries to hide from her pursuers makes Calum's task difficult but he is intrigued by her family story, as it unfolds suggesting there were not five Cambridge spies, a commonly-held assumption, but a sixth may have existed and he belonged to the most famous family in the country. Just as Calum and Nerys, together with their friends Anna and Jacko, are set to leave Cambridge at the conclusion of Nerys' activities, for Calum's favourite island of Great Cumbrae in Scotland, the body of Christina is discovered at the foot of the Trinity College clock tower. Did she fall, jump, or was she pushed? Calum annoys Nerys, as he prone to do, by leaving the group to go visit Cumbrae on their own while he aligns himself with a beleaguered police inspector leading the investigation. They learn that Christina had been contacted just before her death by an ailing centenarian in Wales who claims to have been a close friend of her father at Cambridge and now wants to share with her all he knows. Calum makes the journey to the ominously-named Devil's Bridge but only succeeds in getting snippets of information due to serious illness of Alan Caldwell. He must now make his way north to meet up with Nerys and their friends who are participating in the golf and music celebrations that Calum introduced to the island during the previous year when his adventures dealing with nuclear waste piracy and mysterious death permitted. They are due to fly home after the weekend but he persuades Nerys to extend their trip with relatives in Wales, thereby allowing to him follow up with Caldwell. What he learns is a revelation as the connections of Christina to her infamous father and celebrity mother become clearer. However, what also becomes clearer is the existence of a sixth spy and his special status. Not only that, but a veritable spider's web of British, Russian, Czech, and Nazi players from WWII emerges to complicate the understanding of the already complicated actions and intentions of the spies. Calum rides on the Vale of Rheidol railway where he encounters the two men and separately the other, who had been following Christina. The first highly dramatic confrontation with the two can only be described as a rerun of the scene in the "The Thirty-Nine Steps" and the second might have been his last if not for an intervention by a British secret-service agent tasked with maintaining the secret of the sixth spy's identity. Ultimately, MI6 and Calum have to reluctantly collaborate and share what each other knows and find ways of ensuring that the secret is maintained. That is something Calum foresees as being difficult and it does not fill the security service full of confidence either. Safely back in California, Calum learns more information which allows to him to tie all the loose ends of the mystery together. He is left contemplating why him again and wondering if and when his next adventure might happen.