- Retrieving the Phonology, Grammar and Lexicon of a Dormant Formosan Language 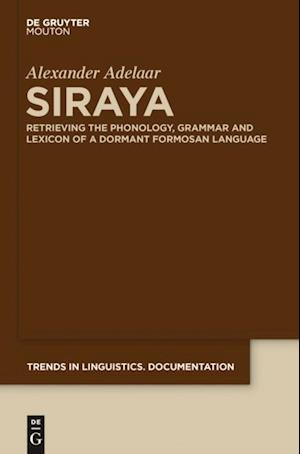 Siraya is a Formosan language once spoken around Tainan City in southwest Taiwan. This comprehensive study is based on an analysis of the language of the Siraya Gospel of St. Matthew, which was translated from the Dutch in 1661. It contains a grammar, lexicon and extensive text with interlinear glossing as well as an introduction with detailed background information. Siraya has many unique linguistic features, which are of great interest to the study of linguistic typology in general. They include various reduplication patterns, orientation prefixes (adding the notions of motion, location or comitation to a verb) and anticipating sequences. The latter are (usually) formal elements of the lexical verb, such as a first consonant or a first syllable, which are prefixed to the auxiliary. Siraya is also of crucial importance for the prehistory of Taiwan because it is one of the first languages to branch off from the Austronesian language family, which has more than 1200 members. The volume is a major contribution to the Siraya people who are keen to rehabilitate Siraya culture heritage and are endeavouring to learn their lost language again. It is a unique achievement in the endeavour to revitalise the traditional languages of Taiwan.