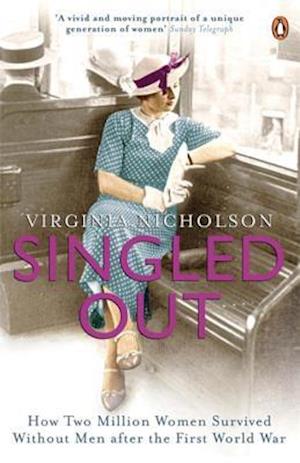 Virginia Nicholson's Singled Out is the touching and beautifully told story of the women who were left alone after World War I - a remarkable generation of women who were changed by war; and in their turn helped change society.In 1919 a generation of young women discovered that there were, quite simply, not enough men to go round, and the statistics confirmed it. After the 1921 Census, the press ran alarming stories of the 'Problem of the Surplus Women - Two Million who can never become Wives...'. This book is about those women, and about how they were forced, by a tragedy of historic proportions, to stop depending on men for their income, their identity and their future happiness.'This is a ground-breaking book, richly nuanced with titbits of information, insight and understanding' Daily Mail 'Remarkably perceptive and well-researched ... Virginia Nicholson has produced another extraordinarily interesting work, sensitive, intelligent and well-written' Sunday Telegraph 'This in an inspiring book, lovingly researched, well-written and humane... the period is beautifully caught' Economist 'Brave, humane and honest' Observer Virginia Nicholson was born in Newcastle-upon-Tyne. She has worked as a documentary researcher for BBC Television and her first book, Charleston - A Bloomsbury House and Garden (written in collaboration with her father, Quentin Bell), was an account of the Sussex home of her grandmother, the painter Vanessa Bell. Her second book, Among the Bohemians: Experiments in Living 1900-1939, was published by Penguin in 2002. She lives in Sussex.