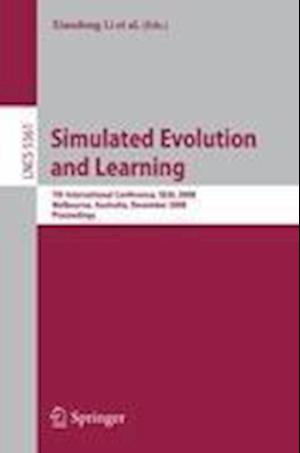 This LNCS volume contains the papers presented at SEAL 2008, the 7th Int- nationalConference on Simulated Evolutionand Learning,held December 7-10, 2008, in Melbourne, Australia. SEAL is a prestigious international conference series in evolutionary computation and learning. This biennial event was ?rst held in Seoul, Korea, in 1996, and then in Canberra, Australia (1998), Nagoya, Japan (2000), Singapore (2002), Busan, Korea (2004), and Hefei, China (2006). SEAL 2008 received 140 paper submissions from more than 30 countries. After a rigorous peer-review process involving at least 3 reviews for each paper (i.e., over 420 reviews in total), the best 65 papers were selected to be presented at the conference and included in this volume, resulting in an acceptance rate of about 46%. The papers included in this volume cover a wide range of topics in simulated evolution and learning: from evolutionarylearning to evolutionary optimization, from hybrid systems to adaptive systems, from theoretical issues to real-world applications. They represent some of the latest and best research in simulated evolution and learning in the world.