- A Study in Printing and Literary History 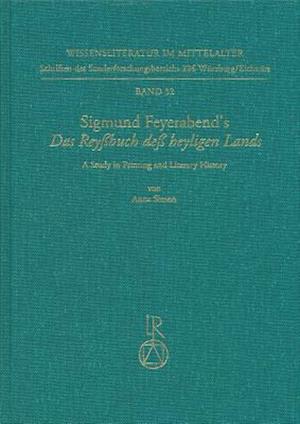 "Das Reyssbuch dess heyligen Lands" was published in Frankfurt am Main in 1584 by Sigmund Feyerabend, leading Protestant publisher of the day. It contains texts dating from early twelfth to the late sixteenth centuries: sixteen pilgrimage reports, including a surprisingly high number of post-Reformation ones, Robert of Reim's history of the First Crusade and the German translation of a Latin pilgrimage guide. Some texts appear in print in the Reyssbuch for the first time; others like Mandeville's Travels, had enjoyed considerable popularity and have a long manuscript and printing history. Reyssbuch travellers and authors include nobles, churchmen, merchants, a doctor and an artisan. The Reyssbuch is not the first collection of travel reports toappear in Germany in the sixteenth century, nor the first to be published by Feyerabend himself; however, it is the first collection of primarily German travel literature rather than translations from the Latin, Spanish, Italian and Portuguese and the only compendium of pilgrimage reports. Moreover, it appeared very late, at a time when the Reformation had caused a decline in pilgrimage and attention was focussed on the New World. This study falls into two parts. The first is the examination of the Reyssbuch as a publisher's product: the printing history of its contents prior to 1584; possible sources for its versions of the texts; the method of their adaption; Feyerabend's intention as expressed in the preface and the extent to which they agree with those of the original authors and publishers; the use of features such as index and marginaliato manipulate reader response; the three subsequent editions of the Reyssbuch (1609, 1629, 1659) and changes both to their content and the way in which they are marketed; and the reception of the compendium as a whole as well as of individual reports from it. The second part seeks to analyse pilgrimage reports as works of literature and discusses the following issues: their structure and its use as a vehicle for the devotional message; their limited use of language and reasons for this, topics which have attracted much attention in scholarly work on pilgrimage reports; the generic identity and function of pilgrimage reports with the accompanying implications for style; pilgrimage reports as the forerunners of the popular prose fiction of the late-fifteenth and early-sixteenth centuries; the relationship between the truth of the actual experience and the truth of the literary form; and the differences between pre- and post-Reformation accounts. Finally the book discusses possible reasons for the Reyssbuch being published in the late sixteenth century, especially the significance of the Turkish threat to Europe and its bearing on the presentation of the texts. Throughout the Reyssbuch is related both to similar works and to its historical background in an attempt to establish, first, the volume's place in a wider socio-political, devotional and literary context; second; contemporary attitudes to pilgrimage and its literary expression.