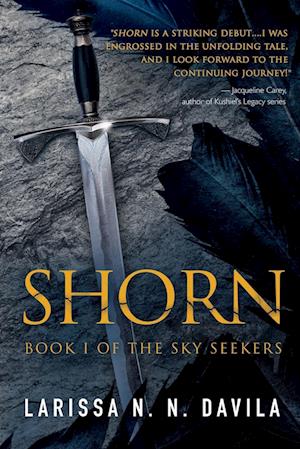 Jhared Denaban, a cursed soldier, enters his country's service desperate to pay the generations-old debt caused by his race's betrayal. Though Shorn of his wings, like all his treacherous kind, Jhared still burns with dark desires for rebellion and flight. Posted to the border to protect Avelos from foreign invaders, he discovers that his best intentions inevitably turn toward chaos. As he seeks the source of grave political and magical threats, he must defend himself from the people who believe his death is the only way the ancestral debt can be settled.

Lady Nemiah, High Priestess of Riana, struggles to keep her people safe on the Sacred Path. Her temple, tasked with preserving balance in Avelos, lost its standing, as well as the faith of its followers, when its priestesses rose against their rulers. Now she seeks forbidden history and heretical secrets to learn how to fight the magic that shreds her country.

Only by betraying Avelos once again can Jhared and Nemiah save their country and all they love from destruction. But what new chaos will their choices create?

Readers who love the political intrigue of Brandon Sanderson's Mistborn series, the world-building and complex characters of Robin Hobb's Farseer series, and the social exploration of power and magic of N. K. Jemisin's Broken Earth trilogy will be riveted by this tale of oppression and resilience, the high cost of vengeance, and the malleable nature of truth. Shorn carries us to a breathtaking new world on wings that won't be broken.