- The Environmental Transformation and Reform of Manchester and Chicago 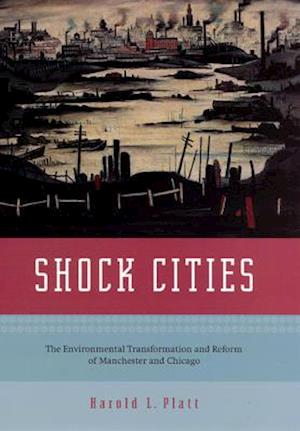 Shock Cities is environmental history of the highest order. This searching work is the first trans-Atlantic study to examine the industrial city in holistic terms, looking at the transformation of its land, water, and air. Harold L. Platt demonstrates how the creation of industrial ecologies spurred the reorganization of urban areas into separate spheres, unhealthy slums in the center and garden estates in the suburbs. By comparing Chicago and Manchester, Platt also shows how the ruling classes managed the political creation of urban space to ensure financial gain--often to the environmental detriment of both regions. Shock Cities also recasts the age of industry within a larger frame of nature. Frightening epidemics and unnatural natural disasters forced the city dwellers onto the path of environmental reform. Crusaders for social justice such as Chicago's Jane Addams and Manchester's Charles Rowley led class-bridging campaigns to clean up the slums. Women activists and other municipal housekeepers promoted regulations to reduce air pollution. Public health experts directed efforts to improve sanitation. Out of these reform movements, the Progressives formulated new concepts of environmental conservation and regional planning. Comparing the two cities, Platt highlights the ways in which political culture and institutions act to turn social geography into physical shapes on the ground. This focus on the political formation of urban space helps illuminate questions of social and environmental justice. Shock Cities will be of enormous value to students of ecology, technology, urban planning, and public health in the Western world.