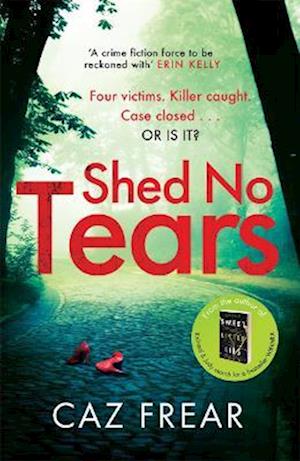 THE BRILLIANT NEW THRILLER FROM THE AUTHOR OF THE RICHARD & JUDY SEARCH FOR A BESTSELLER WINER AND NUMBER ONE BESTSELLER, SWEET LITTLE LIES. 'A crime fiction force to be reckoned with' Erin Kelly'I loved it!' Ann CleevesFour victims.Killer caught.Case closed . . . Or is it? Christopher Masters, known as 'The Roommate Killer', strangled three women over a two-week period in a London house in November 2012. Holly Kemp, his fourth victim, was never found.Until now.Her remains have been unearthed in a field in Cambridgeshire and DC Cat Kinsella and the Major Investigation Team are called in. But immediately there are questions surrounding the manner of her death. And with Masters now dead, no one to answer them. Did someone get it wrong all those years ago? And if so, who killed Holly Kemp? WHAT AUTHORS ARE SAYING ABOUT CAZ FREAR: 'Caz Frear is incredibly gifted' MARIAN KEYES'A major new voice' ERIN KELLY'Caz Frear's ability to write tight, tense dialogue with a dark comedic slant is brilliant' LYNDA LA PLANTE 'Brilliantly written, cleverly plotted, great characters. Can't wait to see this fly!' B. A. PARIS'A wonderful cast of brilliant characters. A triumph for Caz Frear' RACHEL ABBOTT'Crime procedural at its best' C J TUDOR'Reads brilliantly' CLARE MACKINTOSH 'Another absolute smash and one of my favourite protagonists' JO SPAIN'Caz Frear is that rare talent' FIONA CUMMINS'Impossible to put down' ALEX GRAY'The phenomenal Caz Frear' CHRIS WHITAKER'Caz Frear combines a devilishly clever plot and amazing complex characters with a light touch that makes for a deeply satisfying read. Another Cat Kinsella winner' CASS GREEN'Once again Caz Frear gives us a brilliant crime puzzle to solve. With plenty of emotion, Cat Kinsella's trademark wit and an engaging plot to boot, crime fans need look no further for a great read' OLIVIA KIERNAN