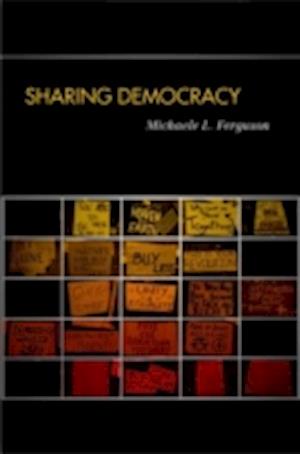 It is frequently assumed that the "people " must have something in common or else democracy will fail. This assumption that democracy requires commonality - such as a shared nationality, a common culture, or consensus on a core set of values - sets theorists and political actors alike on a futile search for what we have in common, and it generates misplaced anxiety when it turns out that this commonality is not forthcoming. In Sharing Democracy, Michaele Ferguson argues that this preoccupation with commonality misdirects our attention toward what we share and away from how we share in democracy. This produces an ironically anti-democratic tendency to emphasize the passive possession of commonality at the expense of promoting the active exercise of political freedom. Ferguson counteracts this tendency by exposing the reasons for the persistent allure of the common. She offers in its stead a radicalvision of democracy grounded in political freedom: the capacity of ordinary people to make and remake the world in which they live. This vision of democracy is exemplified in protest marches: cacophonous, unpredictable, and self-authorizing collective enactments of our world-building freedom. Ferguson develops her radical vision of democracy by drawing on Hannah Arendt's account of how we share a world in common with others, Ludwig Wittgenstein's later philosophy of language, and Linda Zerilli's critique of the essentialist/anti-essentialist debates in feminist theory. She juxtaposes critical readings of democratic theorists with readings of authors in related fields, such as Benedict Anderson, Robert Putnam, and Charles Taylor. Her theoretical argument is illustrated andinformed by interpretations of political events, including the Arab Spring, the integration of Little Rock High School, debates over Quebec secession, immigrant rights protests in the US in 2006, and the Occupy movement.

Forfattere
Bibliotekernes beskrivelse Democratic theorists frequently assume that the "people" must have something in common, or else democracy will fail. This produces an ironically anti-democratic tendency to emphasize the passive possession of commonality. Sharing Democracy counters this tendency with a radical vision of democracy grounded instead in the active exercise of political freedom.