Shaping the Economic Space in Russia: Decision Making Processes, Institutions and Adjustment to Change in the El'tsin Era

- Decision Making Processes, Institutions and Adjustment to Change in the El'tsin Era 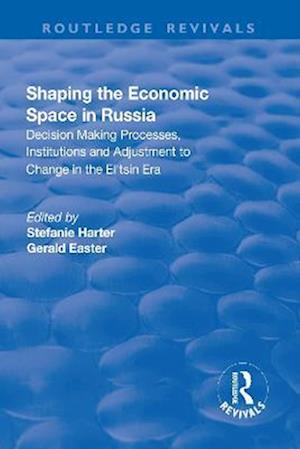 This title was first published in 2000: As the El'tsin era has now drawn to a close, numerous questions remain unanswered regarding the course of Russia's post-Communist traditions. El'tsin's exit from the presidential stage provides an opportunity to assess the achievements of Russia's multi-faceted reforms, to explain the factors that have most shaped the reform process, and to identify the trends that are likely to continue under a presidential successor. This volume embodies such an effort. Its contents are the product of a conference held in May 1999 at the Federal Institute for East European and International Studies in Cologne, Germany. The institute convened an international group of scholars, representing a variety of academic approaches to the study of transition economies in general, and Russia in particular. The title of this volume has been taken from the overarching theme of the conference. The goal was determine the extent to which pre-existing structures and norms of economic and political life have been fundamentally altered by the El'tsin administration's reform campaigns and how these factors themselves have influenced the reform process.