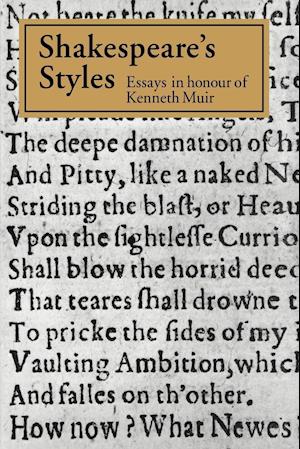 Although Shakespeare is acknowledged to be one of the greatest masters of language the world has known, there are very few books among the thousands devoted to his work which attempt to deal directly with how he uses language. No single book could deal with the 'infinite variety' of tone, diction, imagery, rhythm, and so on which together make up Shakespeare's different styles. But the editors of this book asked a number of distinguished Shakespearian scholars to give an account of what seemed to him or her some particularly interesting and important feature of Shakespeare's use of language. Using a quotation from Shakespeare as a starting point, some authors have focussed their discussion on individual plays; others have ranged more widely under general headings, such as bombast, rhetoric or paradox. The cumulative effect will enable readers, students and theatre-goers to come to a greater awareness of the richness and subtlety of 'Shakespeare's styles'. The three editors are senior Shakespeare critics and scholars and they have all been close associates of Professor Kenneth Muir. It was to honour the life-long devotion of Kenneth Muir to the study of Shakespeare, and to pay a tribute to the inspiration and help which he has given to those who have worked with him, that his new book was devised.