- The Aporias of Ritual Exclusion in Early Modern Royal Drama 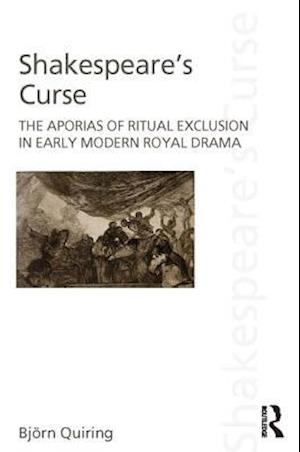 Conceptualizing the curse as the representation of a foundational, mythical violence that is embedded within juridical discourse, Shakespeare's Curse:The Aporias of Ritual Exclusion in Early Modern Royal Drama pursues a reading of Richard III, King John, and King Lear in order to analyse the persistence of imprecations in the discourses of modernity. Shakespeare wrote during a period that was transformative in the development of juridical thinking. However, taking up the relationship between theater, theology and law, Bjorn Quiring argues that the curse was not eliminated from legal discourses during this modernization of jurisprudence; rather, it persisted and to this day continues to haunt numerous speech acts. Drawing on the work of Derrida, Lacan, Walter Benjamin and Giorgio Agamben, among others, Quiring analyses the performativity of the curse, and tracks its power through the juristic themes that are pursued within Shakespeare's plays - such as sovereignty, legitimacy, succession, obligation, exception, and natural law. Thus, this book provides an original and important insight into early modern legal developments, as well as a fresh perspective on some of Shakespeare's best known works. A fascinating interdisciplinary study, this book will interest students and scholars of Law, Literature, and History.