- A Whispering of Nothing in Hamlet, Richard II, Julius Caesar, Macbeth, The Merchant of Venice, and The Winter's Tale 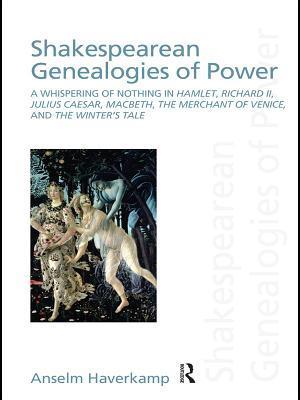 Shakespearean Genealogies of Power proposes a new view on Shakespeare's involvement with the legal sphere: as a visible space between the spheres of politics and law and well able to negotiate legal and political, even constitutional concerns, Shakespeare's theatre opened up a new perspective on normativity. His plays reflect, even create, 'history' in a new sense on the premises of the older conceptions of historical and legal exemplarity: examples, cases, and instances are to be reflected rather than treated as straightforwardly didactic or salvific. Thus, what comes to be recognized, reflected and acknowledged has a disowning, alienating effect, whose enduring aftermath rather than its theatrical immediacy counts and remains effective. In Shakespeare, the law gets hold of its normativity as the problematic efficacy of unsolved - or rarely ever completely solved - problems: on the stage of the theatre, the law has to cope with a mortgage of history rather than with its own success story. The exemplary interplay of critical cultural and legal theory in the twentieth-century - between Carl Schmitt and Hans Kelsen, Walter Benjamin and Ernst Kantorowicz, Hans Blumenberg and Giorgio Agamben, Robert Cover and Niklas Luhmann - found in Shakespeare's plays its speculative instruments.