SHADOWS AND ECHOES: Book One of the RISING SUN Trilogy 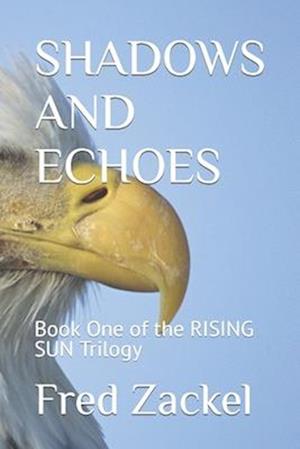 The RISING SUN trilogy is a tale of suspense, intrigue, romance, deception, and betrayal. An epic journey revealing great secrets both international and intimate. An unearthly / mysterious / sinister and beautiful time traveler crosses paths and clashes with an American secret agent in the days before the attack on Pearl Harbor. The RISING SUN trilogy is three complete novels, almost three hundred thousand words, and took thirty-five years to complete.SHADOWS AND ECHOES is the first book in the triptych. American undercover agent Jack Sullivan must race from Berlin to the South Pacific. There, on the other side of the globe, too many high ranking Japanese politicians and military leaders are secretly visiting what should only be a Top Secret seaplane base. On his journey, his life is saved again and again by the beautiful Emily Frost, who plots to kill him later.In the second novel of the triptych, SPY IN THE MIRROR finds Jack Sullivan infiltrating the House of the Rising Sun in the Japanese-occupied South Pacific, where the SS has created an elaborate and luxurious honey trap to spy on their own Japanese allies. Sullivan becomes a spy in disguise among them and the other worldly Emily Frost prowls behind the walls and sets traps of her own.THE BLONDE ASSASSIN is the concluding book in the RISING SUN trilogy. Sullivan learns the greatest secret of the war and he flees in a stolen sea plane into the bloody skies above Pearl Harbor. And then shockingly Emily Frost changes the future fate for the human race.Over the course of Sullivan's seventy-five days' journey, we travel from Berlin, London, and Vienna to Washington and Hawaii, Mount Fuji and Shanghai, and deep into the Japanese-occupied territories in the South Pacific. Our companions on the trip include FDR, Winston Churchill, Adolf Hitler, Heinrich Himmler, Magda Goebbels, a young Ian Fleming and an even younger Kim Philby, all of whom will have their most intimate secrets revealed.