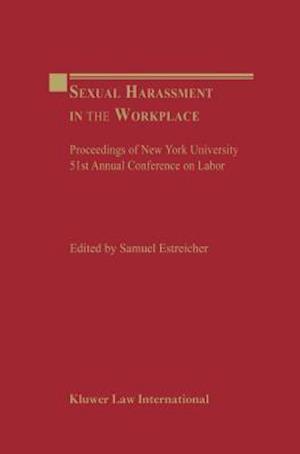 Sexual harassment is the fastest-growing category of employment litigation in the United States. At the root of recent class actions against several major corporations and the subject of three significant Supreme Court decisions during 1998, sexual harassment litigation is an area of legal practice where much remains unsettled and few claims can be confidently met with established defenses or remedies. Because of its potential for ad hoc outcomes that lead to ever-greater legal instability, the question of sexual harassment in the workplace requires sustained attention by policymakers in both business and government and by academics. It was in order to promote this crucial endeavor that New York University's Annual Conference on Labor for 1999 chose this issue as its theme. This long-standing, influential conference is the premier forum for bringing together legal practitioners, academics and researchers, government officials, representatives of companies and labor unions, and human resources specialists to explore solutions to problems in the American workplace. This valuable symposium addresses such provocative questions as: To what extent can sexual harassment claims be meaningfully addressed by existing laws such as the National Labor Relations Act and state and federal anti-discrimination statutes? Are employer sexual harassment policy initiatives on a collision course with the First Amendment? What rights do accused employees have? When are employers liable for sexual harassment? Sexual Harassment in the Workplace also includes insightful discussions of the valuable role that social science methodologies and alternative dispute resolution techniques can play in fostering an environment where sexual harassment is better understood and effectively dealt with.