Set Thy Love in Order 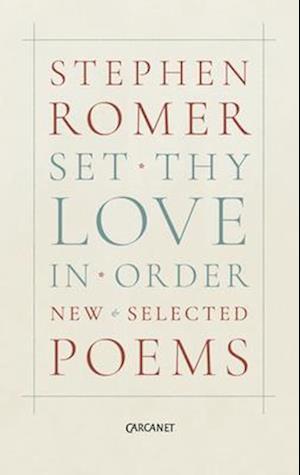 Set Thy Love in Order: New & Selected Poems gathers the work of some thirty years, taken from Stephen Romer's four previous collections, along with a substantial selection of new poems. The title is a Dantesque imperative as old as the Trecento: Ordina questo amore, O tu che m' ami - set thy love in order, o thou who lovest me. Romer's central theme is encapsulated by these words, and his prolonged and painstaking exploration of the 'intermittences of the heart', frequently carried out with a Francophile self-consciousness and rueful wit, constitute so many variations on the theme. Romer's New & Selected articulates the constant oscillation between love, loss and longing, and the religious desire for 'refuge' or 'higher things', and how powerfully these can come to rhythm the life of the mind and the emotions. His more recent work has included poems of love and mourning for his parents, and elegies for friends. Derek Mahon singled out Romer's first collection Idols for its 'emotional candour and intellectual clarity', and since then the poet has endeavoured to turn the light of the intellect (and the wit) on the frequently chaotic and contradictory material of the heart.

Forfattere
Bibliotekernes beskrivelse In Set Thy Love in Order Stephen Romer's poetry is as pressing and urgent as ever. The spirit, still unappeased and peregrine, searches for places of refuge, mostly from itself, and finds them, temporarily, in love, in art and in mourning.