Set Theory with a Universal Set 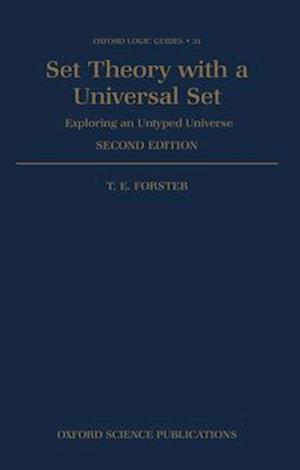 Set theory is concerned with the foundation of mathematics. In the original formulations of set theory, there were paradoxes contained in the idea of the "set of all sets". Current standard theory (Zermelo-Fraenkel) avoids these paradoxes by restricting the way sets may be formed by other sets, specifically to disallow the possibility of forming the set of all sets. In the 1930s, Quine proposed a different form of set theory in which the set of all sets - theuniversal set - is allowed, but other restrictions are placed on these axioms. Since then, the steady interest expressed in these non-standard set theories has been boosted by their relevance to computer science.The second edition still concentrates largely on Quine's New Foundations, reflecting the author's belief that this provides the richest and most mysterious of the various systems dealing with set theories with a universal set. Also included is an expanded and completely revised account of the set theories of Church-Oswald and Mitchell, with descriptions of permutation models and extensions that preserve power sets. Dr Foster here presents the reader with a useful and readableintroduction for those interested in this topic, and a reference work for those already involved in this area.