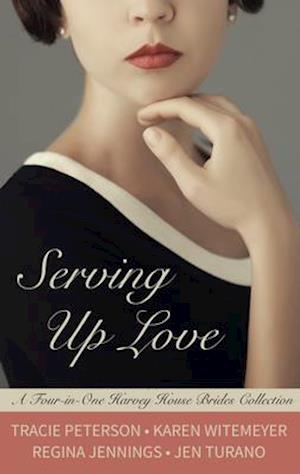 Bestselling novelist Tracie Peterson joins Karen Witemeyer, Regina Jennings, and Jen Turano in this collection of four novellas, each featuring a Harvey Girl heroine. From Kansas to Texas, the Grand Canyon to New Mexico, the stories cross the country with tales of sweet romance and entertaining history. In Karen Witemeyer's "More Than a Pretty Face," a young woman works her hardest to escape poor choices from her youth. Tracie Peterson offers "A Flood of Love," where reuniting with an old flame after more than a decade offers unexpected results. Regina Jennings's "Intrigue a la Mode" delights with a tale of a young woman determined to help support her family, despite warnings of danger nearby. And Jen Turano's "Grand Encounters" heads to the Grand Canyon with a tale of a society belle intent on finding a new life for herself.

Tracie Peterson - A Flood of Love
Returning home to New Mexico for the first time in years to fill in at the Harvey House, Gretchen Gottsacker is sure the past is behind her. But nothing can be that simple. When the man she loved long ago steps back into her life--with a daughter, no less--will she ever be the same? Karen Witemeyer - More Than a Pretty Face
Rosalind Kemp becomes a Harvey Girl, clinging to the promise of one day transferring even farther west, someplace her youthful indiscretion won't catch up to her. But the past is hard to escape, and when the worst occurs, will anyone stand up for her? Regina Jennings - Intrigue a la Mode
When Willow Kentworth is warned that strange things are happening in the railyard after dark, she never intends to get involved. That is, until a handsome new employee at the Harvey House--who has secrets of his own--needs her assistance.

Jen Turano - A Grand Encounter
After her fianc? abandons her, Miss Myrtle Schermerhorn flees New York's pity for a position at the El Tovar Hotel on the rim of the Grand Canyon. She's determined to hold fast to her life of independence--but a rugged, frequent guest of the hotel makes that vow difficult to uphold.