Septuagint from Alexandria to Constantinople 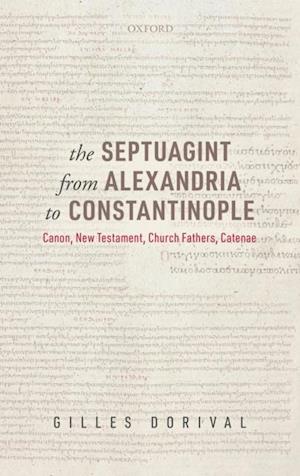 The Hebrew Torah was translated into Greek in Alexandria by Jewish scholars in the third century BCE, and other 'biblical' books followed to form the so-called Septuagint. Since the Septuagint contains a number of books and passages that are not part of the Hebrew Bible, the study of the Septuagint is essential to any account of the canon of the Hebrew Bible/Old Testament. However, the situation is complex because the Greek text of the Old Testament quoted in the NewTestament and in the Church Fathers does not always match the Septuagint text as given by the earliest codices. Furthermore, it must be asked to what extent these texts of the Septuagint may have been Christianized. Up until the fifth century, the Old Testament of the Church Fathers was exclusively the Septuagint-except in the Syriac area-either in its Greek form or in a language translated from this Greek form. The Septuagint thus formed a much more important role in the building of Christian identity than it is usually recognised. After Jerome's Vulgate prevailed in the West, the Septuagint remained the reference text of the catenae. These Byzantine compilations of extracts of Patristic biblicalcommentary were produced first in Palestine, then in Constantinople and its dependancies between the sixth and fifteenth centuries and became the most important media for the transmission of patristic commentary in these centuries. The patristic extracts in the catenae provide a remarkable witness to thetext of the Greek Old Testament as it was known and used by the Church Fathers.