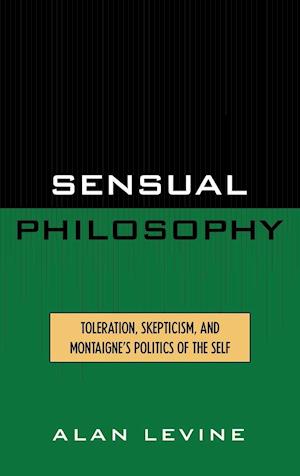 Almost since their publication, the writings of Michel de Montaigne (1533-1592) have provided rich fodder for the work of scholars in myriad disciplines. Philosophers have considered Montaigne's views on skepticism; historians have examined his views on the Indians; deconstructionists and literary scholars have examined Montaigne's view of the self; and, political scientists have touched on his arguments for toleration. However, because each of these projects has been done largely in isolation, most scholars have failed to see the relationships between the various aspects of Montaigne's thought. Alan Levine, in Sensual Philosophy, unites Montaigne's thought for the first time, ably and convincingly demonstrating the significant role Montaigne played in establishing the liberal ethos in the West. In exploring Montaigne's grounding for liberalism, Levine considers Montaigne's conceptualization of skepticism and its relationship to toleration. He argues that Montaigne's theories of self ground his idea of toleration without leaving it open to the corrosive charges of relativism and nihilism. Levine also articulates the importance of Montaigne's thought for contemporary conceptions of personal freedom, individuality, subjectivity, and self-creation by bringing him into dialogue with modern and postmodern political theorists such as Heidegger, Nietzsche, and Richard Rorty. This lively book persuades those who might be tempted by postmodernism that they should turn to Montaigne instead.