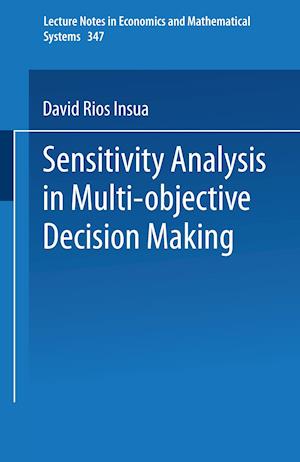 The axiomatic foundations of the Bayesian approach to decision making assurne precision in the decision maker's judgements. In practicc, dccision makers often provide only partial and/or doubtful information. We unify and expand results to deal with those cases introducing a general framework for sensitivity analysis in multi-objective decision making. We study first decision making problems under partial information. We provide axioms leading to modelling preferences by families of value functions, in problems under certainty, and moJelling beliefs by families of probability distributions and preferences by familics of utility functions, in problems under uncertainty. Both problems are treated in parallel with the same parametric model. Alternatives are ordered in a Pareto sense, the solution of the problem being the set of non dominated alternatives. Potentially optimal solutions also seem acceptable, from an intuitive point of view and due to their relation with the nondominated ones. Algorithms are provided to compute these solutions in general problems and in cases typical in practice: linear and bilinear problems. Other solution concepts are criticised on the grounds of being ad hoc. In summary, we have a more ro bust theory of decision making based on a weaker set ofaxioms, but embodying coherence, since it essentially implies carrying out a family of coherent dccision anitlyses.