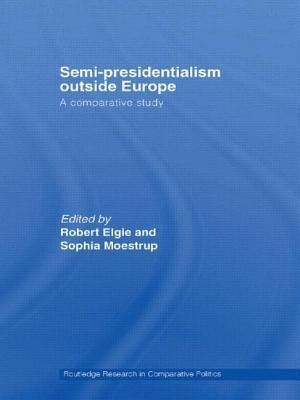 This is the first academic study of the impact of semi-presidentialism in emerging democracies outside of Europe. Semi-presidentialism is where there is both a directly-elected fixed-term president and a prime minister who is responsible to the legislature. For the most part, semi-presidentialism is seen as being a risky choice for new democracies because it can create potentially destabilizing competition between the president and prime minister. And yet, there are now more than fifty semi-presidential countries in the world. Moreover, many of these countries are in Africa, the former Soviet Union and Asia, often in places where democracy has yet to establish a firm foundation. This study begins with a chapter that discusses the advantages and disadvantages of semi-presidentialism and provides the theoretical framework for a wide-ranging series of country chapters presented in the second part of the book. Written by country/area specialists, the case studies highlight the political processes at work in young semi-presidential democracies. Semi-Presidentialism Outside Europe will appeal to those researching and studying in the fields of comparative politics, development and democracy.