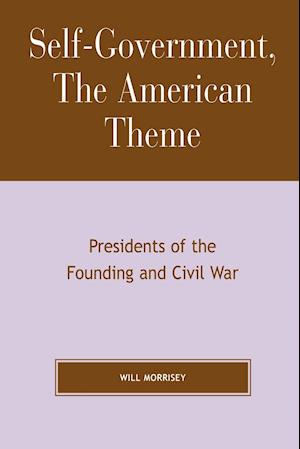 Americans introduced themselves to the world by declaring their independence. They recognized that their "unalienable rights" were secured by institutionalized government that derives its just powers from the consent of the governed. In Self-Government, The American Theme, Will Morrisey defines the concept of self-government and tracks its permutations in the ardent writings of key American presidents. He shows how the transition to a more powerful national state was managed on political soil where "self-government" was not an indigenous crop. Morrisey considers the genesis of "self-government" in the political thought of the founding U.S. presidents, comparing their understanding of the term with that of President Abraham Lincoln and Confederate States of America President, Jefferson Davis. In this text Morrisey aptly demonstrates how the regime of the founders was replaced by a much more statist regime during the Civil War. He offers salient interpretations of the writings of the key presidents of founding and civil war periods, and interpretations centered on the key word, "self-government". This book is an essential contribution to the understanding of early American history and politics.