- The Story of Nuncomar and the Impeachment of Sir Elijah Impey 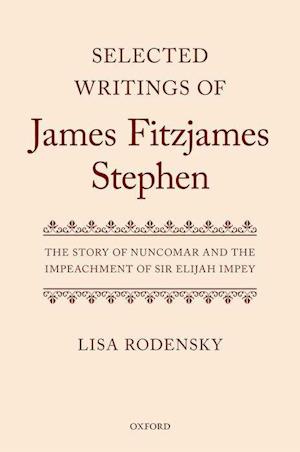 The Story of Nuncomar and the Impeachment of Sir Elijah Impey (1885) examines some of the most controversial events of 18th century English colonial legal history from the point of view of Victorian England's most important legal authority. An experienced barrister, journalist, Legal Member of the Governor-General's Council in India, author of the inaugurative and consolidatory History of the Criminal Law of England (1883), and, finally, a justice on theQueen's Bench, Sir James Fitzjames Stephen argues that far from being the victim of a judicially-engineered execution, Nuncomar (a powerful Indian accused of forgery and conspiracy) received a fair trial from Sir Elijah Impey, Chief Justice of the newly-formed Supreme Court in Bengal, and from his brethren.In mounting this argument, Stephen explicitly challenges the long-held judgments of Nuncomar, Impey, and Warren Hastings that had been pronounced earlier in the century by Stephen's mentor, the influential historian Thomas Babington Macaulay, and accepted thereafter. This new edition of Stephen's text (the first since the work was published more than a hundred years ago) includes a detailed introduction, table of dates, glossary, and a fully augmented index, as well as extensive explanatorynotes. This apparatus offers important contextual information that not only supports scholars who undertake work on this historical period but also allows a wider readership to understand more fully Stephen's complex and provocative text.

Forfattere
Bibliotekernes beskrivelse The first volume to be published in Oxford's new edition of the Selected Writings of James Fitzjames Stephen, this volume contains The Story of Nuncomar and the Impeachment of Sir Elijah Impey, 2 black-and-white halftones