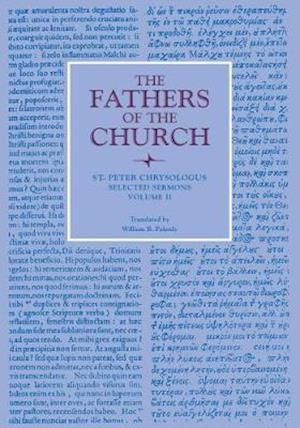 In 1953, the Fathers of the Church series published selected sermons of St. Peter Chrysologus (ca. 406-50), Archbishop of Ravenna and Doctor of the Church, thereby making thirty percent of his authentic sermons available to an English-speaking audience. With the publication of this volume all of Chrysologus's authentic sermons up to number 72 are now available in English. The sermons offer readers a glimpse into the daily life, religious debates, political milieu, and Christian belief and practice in the second quarter of fifth-century Ravenna. Chrysologus preached and served as bishop at a time when the seat of the western Roman Empire was located in Ravenna. His career as bishop bridged the closing years of Augustine's episcopate in North Africa and the early years of Pope Leo the Great's pontificate in Rome. His sermons attest to his relations with the ruler of the state, the Empress Galla Placidia, as well as his familiarity with some of the significant theological controversies of the day. His chief importance, however, was not as an outstanding theologian, but as a shepherd who ruled his flock and preached well to its members. Loyally orthodox, he urged them to practice Christian virtues. He was concerned with their moral rectitude and spiritual growth, their understanding of the basic tenets of the Christian faith, their reverence and love for God, and their immersion in the Scriptures. Chrysologus's sermons are relatively brief in length, at least according to patristic standards, and he combines colloquial speech with a highly rhetorical flourish. The imagery that he employs indicates how attuned he was to the experiences of his congregation, how enamored he was of the beauty of the countryside or seashore, and how thoroughly imbued he was with the letter and the spirit of the Scriptures.