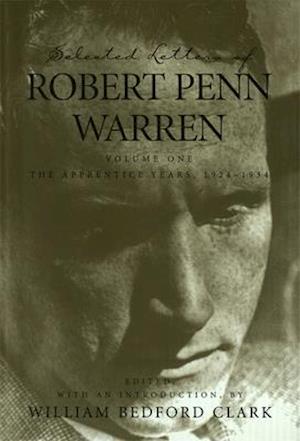 In America's twentieth century, there is no man of letters more versatile, distinguished, and influential than the poet, novelist, editor, critic, social commentator, and teacher Robert Penn Warren (1905-1989). The most intimate of Warren's "letters," his personal correspondence, now join his published canon under William Bedford Clark's expert supervision. Volume One, The Apprentice Years, forms a kind of epistolary coming-of-age novel, taking Warren from the awkwardness of emerging genius during his Fugitive student years at Vanderbilt to the brink of producing great work in a newly appointed post at Louisiana State University.

Warren's earliest correspondence limns a friendship in earnest with Allen Tate, a crushing heartbreak, and an attempted suicide. Eventually the author regroups, graduates with honors, and entertains a bad-boy phase at Berkeley and Yale. As he studies at Oxford, writes his first book, and decides not to complete his doctorate, Warren exhibits a deepening maturity and devotion to his literary craft, expressing ever more complex ideas about poetry and fiction. His nagging financial difficulties, growing commitment to the -Agrarian movement, controversial essay for I'll Take My Stand, marriage to Cinina Brescia, and professional uncertainty as one of the first to combine writing with college teaching lead him into the 1930s, when the bright prospect of tenure and an opportunity to remake the Southwest Review arises.

Warren's letters, all but one previously unpublished, fascinate in their revelations, such as the author's surprisingly tangled relationship with his parents, his delicate health, and the gossip about major literary figures, including Tate, John Crowe Ransom, Donald Davidson, and Laura Riding. But beyond rich biographical detail, they offer a veritable self-portrait of the fledgling artist: "When a person writes a letter

it is nearly as much one to himself as to the person who takes it from the postbox." The self-conscious, precocious, yet sensitive young Warren modulates to the sardonic, irreverent aesthete/wit "Red" and finally acquires a voice distinctively "Warrenesque," confident and sophisticated. Thus the imaginative as well as literal aspects of these years in Warren's life are conveyed, his writing persona and historical person always an intriguing comparison.

Highly accessible, unfailingly interesting, and scrupulously annotated, The Apprentice Years will satisfy scholar and lay reader alike, providing a unique window on what it means to "profess" the writer's calling in an era of rapid change. When complete, the selected letters of Robert Penn Warren will prove an indispensable addition to the author's literary oeuvre.