- American Tourists in France from Jefferson to the Jazz Age 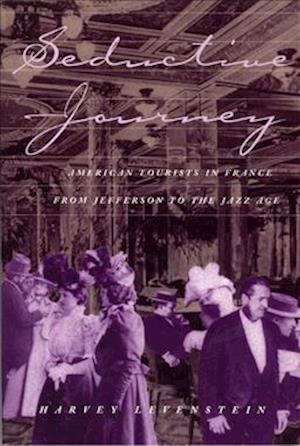 For centuries, France has cast an extraordinary spell on travelers. Harvey Levenstein's Seductive Journey explains why so many Americans have visited it, and tells, in colorful detail, what they did when they got there. The result is a highly entertaining examination of the transformation of American attitudes toward French food, sex, and culture, as well as an absorbing exploration of changing notions of class, gender, race, and nationality. Levenstein begins in 1786, when Thomas Jefferson instructed young upper-class American men to travel overseas for self-improvement rather than debauchery. Inspired by these sentiments, many men crossed the Atlantic to develop taste and refinement. However, the introduction of the transatlantic steamship in the mid-nineteenth century opened France to people further down the class ladder. As the upper class distanced themselves from the lower-class travelers, tourism in search of culture gave way to the tourism of conspicuous leisure, sex, and sensuality. Cultural tourism became identified with social-climbing upper-middle-class women. In the 1920s, prohibition in America and a new middle class intent on having fun helped make drunken sprees in Paris more enticing than trudging through the Louvre. Bitter outbursts of French anti-Americanism failed to jolt the American ideal of a sensual, happy-go-lucky France, full of joie de vivre. It remained Americans' favorite overseas destination. From Fragonard to foie gras, the delicious details of this story of how American visitors to France responded to changing notions of leisure and blazed the trail for modern mass tourism makes for delightful, thought-provoking reading. ...a thoroughly readable and highly likable book.--Deirdre Blair, New York Times Book Review

Forfattere
Bibliotekernes beskrivelse For centuries the pleasures of France have been legendary, casting a magic spell on innumerable travellers. This text explains why so many Americans have visited France and tells in detail what they did when they got there. 41 halftones