Securing the Right to Employment

- Social Welfare Policy and the Unemployed in the United States 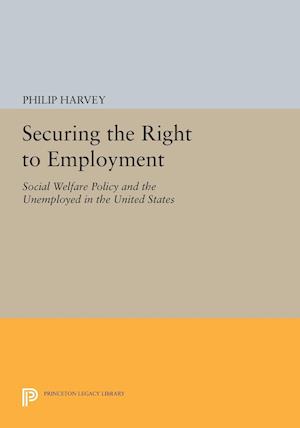 Basing his proposal on plans developed by New Deal social welfare administrators, Harvey analyzes the feasibility and desirability of using public sector job creation to secure a right to employment. He shows that such a policy would provide more effective relief from the problems of poverty and unemployment than do existing arrangements while permitting a major expansion in the production of public goods and services without increasing tax burdens. The economic side-effects and administrative problems associated with the policy are carefully explored and found manageable. Finally, the book concludes with an assessment of the political interests that stand in the way of policy initiatives like the one proposed. Originally published in 1989. The Princeton Legacy Library uses the latest print-on-demand technology to again make available previously out-of-print books from the distinguished backlist of Princeton University Press. These editions preserve the original texts of these important books while presenting them in durable paperback and hardcover editions.The goal of the Princeton Legacy Library is to vastly increase access to the rich scholarly heritage found in the thousands of books published by Princeton University Press since its founding in 1905.