- The Postal Service, the South, and Sectional Controversy 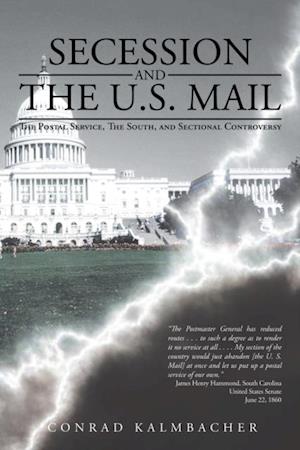 In Secession and the U. S. Mail: The Postal Service, The South, and Sectional Controversy, Conrad Kalmbacher tells the little known story of over fifty years of dissension between the Post Office Department and the South, culminating in the departments role in the events leading to secession and the Guns of April 1861. Severe reductions and retrenchment in mail service throughout the South and on Mississippi River steamboats during the administration of Postmaster General Joseph Holt, 1859-1860, angered southern senators and congressmen against the federal government. Deploring the postmaster generals policy, southern leaders called Holt our bitter foe who, by a mere stroke of his pen had curtailed mail service in the South to such a degree as to render it no service at all. Because of this bitter anger, one Pulitzer Prize-winning historian characterized Holts policy as one of the less tangible factors leading to secession. Drawing on House and Senate documents, postmasters general reports, and Congressional debates, as well as personal letters, diaries, memoirs, and newspapers of the time, the author makes extensive use of primary sources. The book details how antagonisms between the Postal Service and the South had their beginnings early on in American history: Continual debates questioned whether the South received its fair share of federal dollars for post offices and post routes. Southerners defended the maintenance of unprofitable mail routes in remote areas. Negro postriders caused resentment among Southerners. And years of controversy inflamed the South over the distribution of abolitionist literature through the mails. Today, when the role of government is a central issue in American politics, it is revealing to consider the ominous signposts of 1859-1860, as the Post Office Department - at that time the principal political agency of the federal government became embroiled in overheated debate, partisan bickering, and failed compromise.