Searching for the Just City 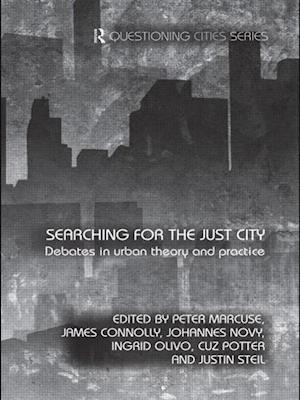 Cities are many things. Among their least appealing aspects, cities are frequently characterized by concentrations of insecurity and exploitation. Cities have also long represented promises of opportunity and liberation. Public decision-making in contemporary cities is full of conflict, and principles of justice are rarely the explicit basis for the resolution of disputes. If today's cities are full of injustices and unrealized promises, how would a Just City function? Is a Just City merely a utopia, or does it have practical relevance? This book engages with the growing debate around these questions. The notion of the Just City emerges from philosophical discussions about what justice is combined with the intellectual history of utopias and ideal cities. The contributors to this volume, including Susan Fainstein, David Harvey and Margit Mayer articulate a conception of the Just City and then examine it from differing angles, ranging from Marxist thought to communicative theory. The arguments both develop the concept of a Just City and question it, as well as suggesting alternatives for future expansion. Explorations of the concept in practice include case studies primarily from U.S. cities, but also from Europe, the Middle East and Latin America. The authors find that a forthright call for justice in all aspects of city life, putting the question of what a Just City should be on the agenda of urban reform, can be a practical approach to solving questions of urban policy. This synthesis is provocative in a globalised world and the contributing authors bridge the gap between theoretical conceptualizations of urban justice and the reality of planning and building cities. The notion of the Just City is an empowering framework for contemporary urban actors to improve the quality of urban life and Searching for the Just City is a seminal read for practitioners, professionals, students, researchers and anyone interested in what urban futures should aim to achieve.