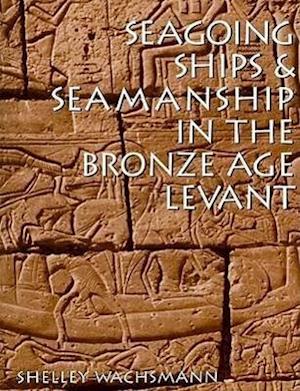 During the Bronze Age, the ancient societies that ringed the Mediterranean, once mostly separate and isolate, began to reach across the great expanse of sea to conduct trade, marking an age of immense cultural growth and technological development. These intersocietal lines of communication and paths for commerce relied on rigorous open-water travel. And, as a potential superhighway, the Mediterranean demanded much in the way of seafaring knowledge and innovative ship design if it were to be successfully navigated. In Seagoing Ships and Seamanship in the Bronze Age Levant Shelley Wachsmann presents a one-of-a-kind comprehensive examination of how the early eastern Mediterranean cultures took to the sea--and how they evolved as a result. The author surveys the blue-water ships of the Egyptians, Syro-Canaanites, Cypriots, Early Bronze Age Aegeans, Minoans, Mycenaeans, and Sea Peoples, and discusses known Bronze Age shipwrecks. Relying on archaeological, ethnological, iconographic, and textual evidence, Wachsmann delivers a fascinating and intricate rendering of virtually every aspect of early sea travel--from ship construction and propulsion to war on the open water, piracy, and laws pertaining to conduct at sea. This broad study is further enhanced by contributions from other renowned scholars. J. Hoftijzer and W. H. van Soldt offer new and illuminating translations of Ugaritic and Akkadian documents that refer to seafaring. J. R. Lenz delves into the Homeric Greek lexicon to search out possible references to the birdlike shapes that adorned early ships' stem and stern. F. Hocker provides a useful appendix and glossary of nautical terms, and George F. Bass's foreword frames the study's scholarly significance and discusses its place in the nautical archaeological canon. This book brings together for the first time the entire corpus of evidence pertaining to Bronze Age seafaring and will be of special value to archaeologists, maritime historians, philologists, and Bronze Age textual scholars. Offering an abundance of line drawings and photographs and written in a style that makes the material easily accessible to the layperson, Wachsmann's study is certain to become a standard reference for anyone interested in the dawn of sea travel.