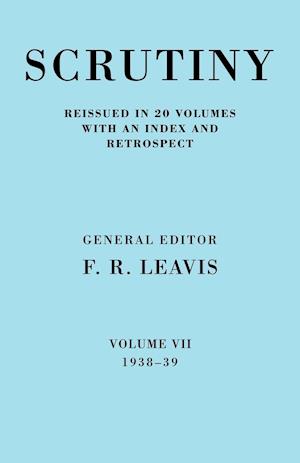 Scrutiny was first issued quarterly from Cambridge between 1932 and 1953, the principal editor throughout being Dr Leavis. It is now recognized as a formative influence on English intellectual and cultural life worthy to rank with the great reviews of the eighteenth and nineteenth centuries. This reissue is of the 1963 combined set, including a final volume containing an important Retrospect by Dr Leavis and a substantial analytical index. Scrutiny offers an almost complete critical history of English literature from Chaucer to the mid-twentieth century. Medieval literature, Shakespeare, the seventeenth-century poets, Pope, Dryden, Johnson, the great romantics, the Victorians, and nearly all the important modern writers are seriously examined. Many of the articles have become classics, and resulted in revisions of previously accepted views. An important feature of Scrutiny, still of great interest, is the book review section, where many of the important books of the time, and some of the pretentious ones too, were reviewed as they appeared.