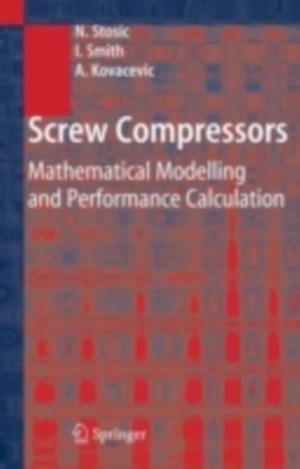 Althoughtheprinciplesofoperationofhelicalscrewmachines,ascompressors or expanders, have been well known for more than 100 years, it is only during the past 30 years that these machines have become widely used. The main reasons for the long period before they were adopted were their relatively poor e?ciency and the high cost of manufacturing their rotors. Two main developments led to a solution to these di?culties. The ?rst of these was the introduction of the asymmetric rotor pro?le in 1973. This reduced the bl- hole area, which was the main source of internal leakage by approximately 90%, and thereby raised the thermodynamic e?ciency of these machines, to roughly the same level as that of traditional reciprocating compressors. The second was the introduction of precise thread milling machine tools at - proximately the same time. This made it possible to manufacture items of complex shape, such as the rotors, both accurately and cheaply. From then on, as a result of their ever improving e?ciencies, high rel- bility and compact form, screw compressors have taken an increasing share of the compressor market, especially in the ?elds of compressed air production, and refrigeration and air conditioning, and today, a substantial proportion of compressors manufactured for industry are of this type. Despite, the now wide usage of screw compressors and the publication of many scienti?c papers on their development, only a handful of textbooks have been published to date, which give a rigorous exposition of the principles of their operation and none of these are in English.