- A History of Scotland Through its Monuments and Memorials 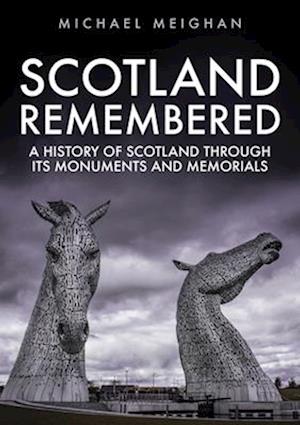 Monuments are all around us. We walk or drive past them every day, yet we are often only vaguely aware of their existence. They are in cemeteries and parks; on busy streets and in lonely places; they stand by the sea or on the top of hills. Some are very obvious, such as the Scott Monument, and some are obscure and hidden. They commemorate many things: often the dead of history in wars at home and abroad and disasters, both recent and long past, but they also honour the achievements of our inventors, writers and explorers and our kings, queens, saints and martyrs. They appear as statues, as windows, as sculptures, as plaques and sometimes as buildings. Sometimes they take centre stage in the middle of city squares or on the summit of lonely mountains.In this book author Michael Meighan examines the stories behind the monuments and memorials of Scotland, and what they reveal about the history of the country: its most ancient monuments; wars and battles; heroes and villains; cultural figures, explorers and scientists; and disasters, both natural and otherwise. The monuments range from famous landmarks such as the Wallace Memorial at Stirling and the Wallace Monument in Aberdeen, the Scott Monument in Edinburgh, to memorials to Robert Burns, Mary, Queen of Scots and Bonnie Prince Charlie and the Jacobite Risings at Glenfinnan, Prestonpans and Culloden, which represent the shaping of Scotland. Other monuments range from Greyfriars Bobby, memorials to Saint Margaret of Scotland and the Commando Memorial in Lochaber and many more.

Forfattere
Bibliotekernes beskrivelse In this book author Michael Meighan examines the history of Scotland through its monuments and memorials. 100 Illustrations, unspecified