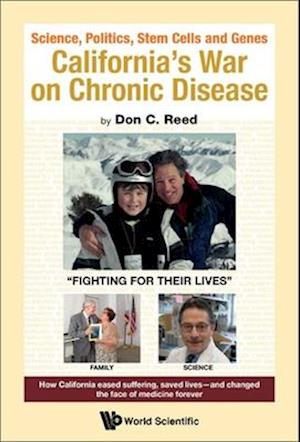 CALIFORNIA'S WAR ON CHRONIC DISEASE is author Don Reed's fourth book on the California stem cell program: CIRM, the California Institute for Regenerative Medicine. And - he's working on another one!Could California afford to spend another $5.5 billion on stem cell research? 'We can't afford NOT to spend it,' said Bob Klein, inventor of the program.'Killer in My Classroom' is the story of a boy who may have had schizophrenia - and who murdered two friends. Is there a medical way to prevent such tragedy?'How Many Chronic Diseases Do You Have?' Maybe several ... 'Is Aging Something Which Can Be Fought?' Increased muscle mass is crucial as we age, says the author, even in odd places like around the eye.'Incurably III - for Just One Day?' The author suggests a fantasy; what if authority figures suffered a chronic disease for a single day - would they be more likely to support medical research funding?The Eiffel Tower was originally intended to be temporary: how tragic if it had been disassembled after a few short months! Similarly, the California stem cell program could have stopped after its original funding was gone; but California had other plans for this world-changing enterprise.Imagine falling from the edge of space - into a lightning storm - and surviving? Miracles are possible, including the curing of incurable illness.'There are those around whom the lightnings play, and, so long as their greatness lasts, the fates suspend their dull laws'- Edison Marshal might have been writing about Bob Klein, who dreamed great dreams, and made them real.