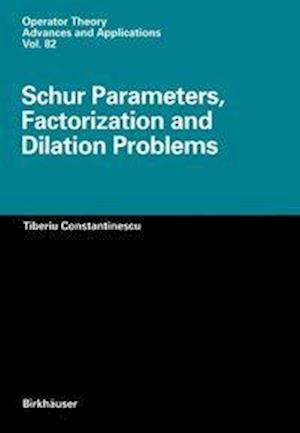 The subject of this book is about the ubiquity of the Schur parameters, whose introduction goes back to a paper of I. Schur in 1917 concerning an interpolation problem of C. Caratheodory. What followed there appears to be a truly fascinating story which, however, should be told by a professional historian. Here we provide the reader with a simplified version, mostly related to the contents of the book. In the twenties, thf~ theory of orthogonal polynomials on the unit circle was developed by G. Szego and the formulae relating these polynomials involved num- bers (usually called Szego parameters) similar to the Schur parameters. Mean- while, R. Nevanlinna and G. Pick studied the theory of another interpolation problem, known since then as the Nevanlinna-Pick problem, and an algorithm similar to Schur's one was obtained by Nevanlinna. In 1957, Z. Nehari solved OO an L problem which contained both Caratheodory-Schur and Nevannlina-Pick problems as particular cases. Apparently unrelated work of H. Weyl, J. von Neu- mann and K. Friedericks concerning selfadjoint extensions of symmetric operators was connected to interpolation by M. A. Naimark and M.G Krein using some gen- eral dilation theoretic ideas. Classical moment problems, like the trigonometric moment and Hamburger moment problems, were also related to these topics and a comprehensive account of what can be called the classical period has appeared in the monograph of M. G. Krein and A. A. Nudelman, [KN].

Forfattere
Bibliotekernes beskrivelse This volume provides a development of various topics, exclusively in terms of Schur parameters, describing two new versions of general approaches to interpolation. Also covered are the theoretical aspects of a large class of algorithms in interpolation, filtering and scattering. 1 Hardback X, 254 p.