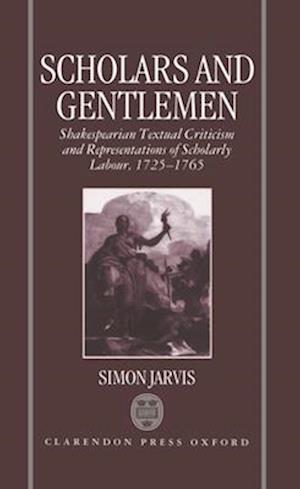 Among the earliest editors of Shakespeare were several of the eighteenth century's most powerful writers. Scholars and Gentlemen demonstrates how much was at stake for these writers in the editing of English texts.Simon Jarvis examines not only eighteenth-century texts of Shakespeare, but also sources as disparate as Pope's Dunciad, eighteenth-century classical and scriptural editing, and Johnson's Dictionary to show the importance of politically contested representations of scholars and scholarship for the formation of British public literary culture. Offering an unprecedented detailed account of both editorial theory and philological practice during the period, thebook throws new light on a wide variety of issues, from the debates over the possibility of a polite and settled national language to the epistemological and cultural presuppositions of editorial method.Scholars and Gentlemen will interest not only students of eighteenth-century English literature, but also readers, editors, and critics of Shakespeare, and all those concerned with the theoretical implications of the reproduction of literary texts today.

Forfattere
Bibliotekernes beskrivelse Among the earliest editors of Shakespeare were several of the 18th century's most powerful writers. This study draws on a number of historical sources to demonstrate how much was at stake for these writers in the editing of English texts.