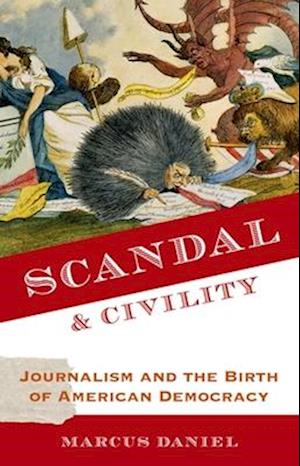 A new breed of journalists came to the fore in post-revolutionary America-fiercely partisan, highly ideological, and possessed of a bold sense of vocation and purpose as they entered the fray of political debate. Often condemned by latter-day historians and widely seen in their own time as a threat to public and personal civility, these colorful figures emerge in this provocative new book as the era's most important agents of political democracy.Through incisive portraits of the most influential journalists of the 1790s-William Cobbett, Benjamin Franklin Bache, Philip Freneau, Noah Webster, John Fenno, and William Duane-Scandal and Civility moves beyond the usual cast of "revolutionary brothers" and "founding fathers" to offer a fresh perspective on a seemingly familiar story. Marcus Daniel demonstrates how partisan journalists, both Federalist and Democratic-Republican, were instrumental in igniting and expanding vital debates overthe character of political leaders, the nature of representative government, and, ultimately, the role of the free press itself. Their rejection of civility and self-restraint-not even icons like George Washington were spared their satirical skewerings-earned these men the label "peddlers ofscurrility." Yet, as Daniel shows, by breaking with earlier conceptions of "impartial" journalism, they challenged the elite dominance of political discourse and helped fuel the enormous political creativity of the early republic.Daniel's nuanced and penetrating narrative captures this key period of American history in all its contentious complexity. And in today's climate, when many decry media "excesses" and the relentlessly partisan and personal character of political debate, his book is a timely reminder that discord and difference were essential to the very creation of our political culture.