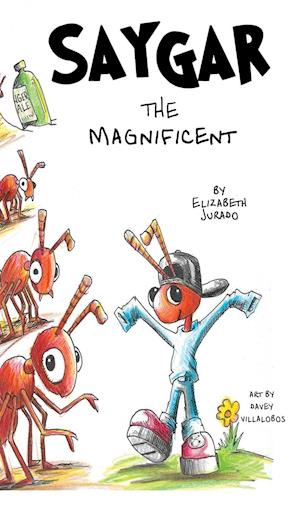 YIKES! IS THAT AN ANT IN THE CLASSROOM?

Saygar the Magnificent is a hilarious adventure of a socially awkward Joseph Mateo, a mischeivous ant named Saygar, and a whole mess of trouble! When Joseph captures an ant in a ginger ale bottle, he is shocked by the appearance of a weird looking kid in the classroom closet. This wasn't some ordinary kid - it was his ant from that morning, transformed into a human-sized ant. After finding clothes for the ant and naming him Saygar A. Hill, Joseph hides him in plain sight, in Ms, Kelly's classroom: room 106. Joseph watches Saygar's every move to make sure no one finds out his true identitiy - which is hard considering the two wriggly antennae on his head - while he searches for a way to return him to the anthill. Joseph struggles with his shyness and paralyzing panic attacks as he guides the troublesome Saygar through the pitfalls of the human world and temperamental classmates. Together, they deal with a a bossy-know-it-all, the meanest bully in the world, and many other classroom dramas! Join Joseph and Saygar in their wacky adventure! You've never seen a duo like Joseph and Saygar!