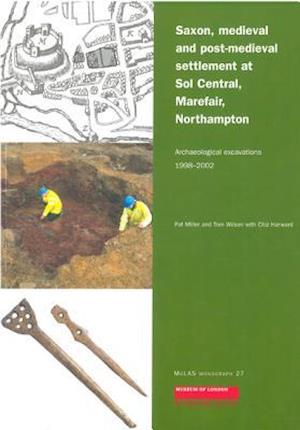 Excavation work by Northamptonshire Archaeology and MoLAS revealed residual prehistoric and Roman artefacts and Middle Saxon settlement evidence in the form of a single sunken-floored building. Activity intensified in the Late Saxon to Norman period, when metalworking, crop processing and bone working took place at the site. The establishment of buildings suggests the main Saxon settlement around St Peter's Church spread northeastwards towards the limits of the town. A cemetery was established on the site in the 10th century and associated with the chapel of St Martin in the 12th century, from which 72 burials were excavated. The area continued to develop during the medieval period, with construction of timber and stone buildings and intensifying industrial activity represented by pits, hearths and smithing debris. The cemetery remained in use until the mid 13th century. By the 14th century the route of Pike Lane was established and evidence has been found of metalworking, cereal processing, animal husbandry and butchery, and small-scale tanning. Use of the area declined during the 15th and 16th centuries.