Sauromachy: An Epic of the Fall of Empires 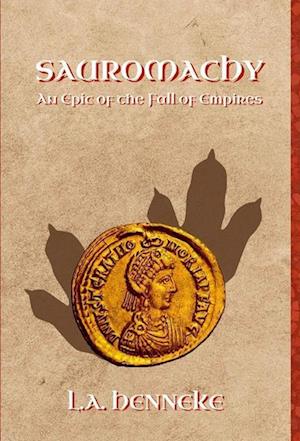 Despite being born into the Roman royal household, a sister to the emperor himself, Honoria does not know her true strength. She lives in an uneasy time. The Roman Empire of old is fractured, rumors of Dragons in Gaul have reached her ears, and Attila the Hun plans to march on Italy and claim her as his prize. Exiled on account of this and all her previous scandals, Honoria finds herself thrust into a world that is just as weird and wonderful as it is violent. Attila's armies ravage the lands, hoping to bargain with the dread Dragon of which Rumor spoke, but he is not the only ancient reptile that has been spotted. A strange breed of animal that has long outlived the hour of its extinction has been seen again in Europe, and it is in its prehistoric kind that Honoria shall find her most potent ally. Joining forces with a man whom her people would call a barbarian, Honoria will visit worlds beyond her own to marshal the one host that could save their world, an army of terrors older than any empire the earth has ever known- Legio Dinosaurorum. She will travel across the cosmos to face Attila head on and see the Huns defeated, and she will go down into the Underworld itself, battling forces she had long imagined as mythological to fight for what- and who- she loves. But regardless of whether or not dour Attila is vanquished, Rome is doomed to fall. Like all empires, she must fade. Rome's fate will echo that of the dinosaurs Honoria hopes will save her people. If Honoria is truly to bring peace to the people she cares for, she will have to do more than wage war on all her enemies. That alone will do her little good in healing the wounds left by a war that has torn a continent apart. **This book contains extended sequences of epic fantasy violence. There are also sparse references to sexual acts/violence, but no depictions thereof.**