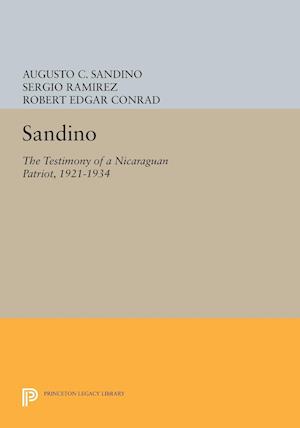 "Washington is called the father of his country; the same may be said of Bol!var and Hidalgo; but I am only a bandit, according to the yardstick by which the strong and the weak are measured."--Augusto C. Sandino. For the first time in English, here are the impassioned words of the remarkable Nicaraguan hero and martyr Augusto C. Sandino, for whom the recent revolutionary regime was named. From 1927 until 1933 American Marines fought a bitter jungle war in Nicaragua, with Sandino as their guerrilla foe. This artisan and farmer turned soldier was an unexpectedly formidable military threat to one of the succession of regimes that the United States had imposed on that country beginning in 1909. He was also the creator of a deeply patriotic language of protest--eloquent, often naive, sometimes cruel, and always defiant. The documents in this volume, presented chronologically, constitute a spontaneous autobiography, a record not only of Sandino's adventurous life but also of a crucial and often overlooked aspect of the relationship between Nicaragua and the United States. Emblematic of the deep-rooted U.S. entanglement in Nicaraguan affairs is the fact that Anastasio Somoza, who assassinated Sandino in 1934, was the father of the Somoza overthrown by the Sandinistas in 1979.By 1933 Sandino's guerrilla army had at last forced the departure of the American Marines from Nicaragua, and in that same year he had negotiated a peace agreement with the new president, Juan Bautista Sacasa. Sacasa granted Sandino and a hundred followers a large tract of government land to establish an agricultural cooperative, and Sandino agreed to partial disarmament of of his men. But a year later he was seized near the presidential mansion by solders of Somoza's National Guard and assassinated with two of his generals. The National Guard then attacked and destroyed his cooperative. Both before and after Sandino's brutal assassination, Somoza tried to discredit the idiosyncratic blend of political, religious, and theosophical ideas through which Sandino inspired his soldiers.Included among the documents here are expressions not only of Sandino's military preoccupations and of his philosophy but also of his practical concerns about worker organization and legislation, the rights of women and children, the protection and development of Nicaragua's Indians, Central American unification, construction of a Nicaraguan canal for the benefit of Nicaraguans and the world in general, Indo-Hispanic cooperation, and land reform. This work, which is based on the two-volume Spanish edition compiled by Sergio Ramirez, includes an introduction by Robert Conrad setting Sandino's life in historical context. Originally published in 1990. The Princeton Legacy Library uses the latest print-on-demand technology to again make available previously out-of-print books from the distinguished backlist of Princeton University Press. These editions preserve the original texts of these important books while presenting them in durable paperback and hardcover editions. The goal of the Princeton Legacy Library is to vastly increase access to the rich scholarly heritage found in the thousands of books published by Princeton University Press since its founding in 1905.