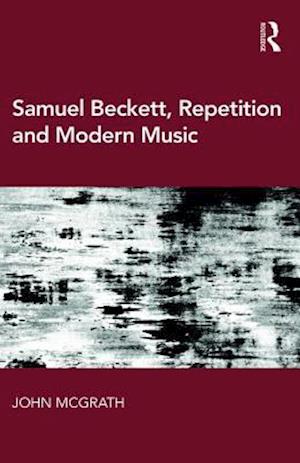 Music abounds in twentieth- century Irish literature. Whether it be the "thought-tormented" music of Joyce's "The Dead", the folk tunes and opera that resound throughout Ulysses, or the four- part threnody in Beckett's Watt, it is clear that the influence of music on the written word in Ireland is deeply significant. Samuel Beckett arguably went further than any other writer in the incorporation of musical ideas into his work. Musical quotations inhabit his texts, and structural devices such as the da capo are metaphorically employed. Perhaps most striking is the erosion of explicit meaning in Beckett's later prose brought about through an extensive use of repetition, influenced by his reading of Schopenhauer's philosophy of music. Exploring this notion of "semantic fluidity", John McGrath discusses the ways in which Beckett utilised extreme repetition to create texts that operate and are received more like music. Beckett's writing has attracted the attention of numerous contemporary composers and an investigation into how this Beckettian "musicalized fiction" has been retranslated into contemporary music forms the second half of the book. Close analyses of the Beckett- inspired music of experimental composer Morton Feldman and the structured improvisations of avantjazz guitarist Scott Fields illustrate the cross- genre appeal of Beckett to musicians, but also demonstrate how repetition operates in diverse ways. Through the examination of the pivotal role of repetition in both music and literature of the twentieth century and beyond, John McGrath's book is a significant contribution to the field of Word and Music Studies.