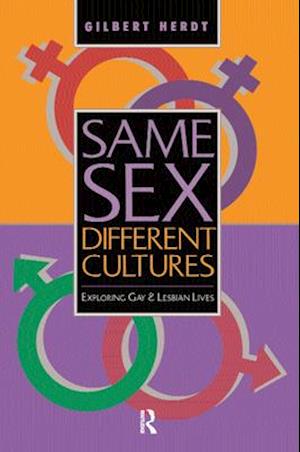 Because homoerotic relations can be found in so many cultures, Gilbert Herdt argues that we should think of these relations as part of the human condition. This new cross-cultural study of gays, lesbians, and bisexuals around the world, Same Sex, Different Cultures provides a unique perspective on maturing and living within societies, both historical and contemporary, that not only acknowledge but also incorporate same-gender desires and relations.Examining what it means to organize ?sex? in a society that lacks a category for ?sex,? or to love someone of the same gender when society does not have a ?homosexual? or ?gay/lesbian? role, Herdt provides provocative new insights in our understanding of gay and lesbians lives. Accurate in both its scientific conceptions and wealth of cultural and historical material, examples range from the ancient Greeks and feudal China and Japan to the developing countries of Africa, India, Mexico, Brazil, and Thailand, from a New Guinea society to contemporary U.S. culture, including Native Americans. For all of these peoples, homoerotic relations emerge as part of culture?and not separate from history or society.In many of these groups, loving or engaging in sexual relations is found to be the very basis of the local cultural theory of ?human nature? and the mythological basis for the cosmos and the creation of society. The mistake of modern Western culture, Gilbert contends, is to continue the legalization of prejudice against lesbians and gays.In this light, the book addresses the issue of ?universal? versus particular practices and reveals positive role models that embrace all aspects of human sexuality. Finally, it offers knowledge of the existence of persons who have loved and have been intimate sexually and romantically with the same gender in other lands through divergent cultural practices and social roles.The most important lesson to learn from this cross-cultural and historical study of homosexuality is that there is room f