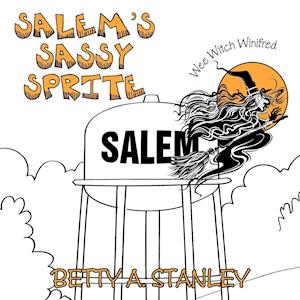 Winifred, Salem's wee witch, has just celebrated her eighth birthday in early October and her special gift was a broom made just for her by the broom master, Mr. Martin. She has been practicing her skill with this incredible aircraft hoping for an amazing solo flight on her first Halloween. Winifred's practice flight on this mid-October night with a full Hunter's Moon, is just as she planned from the lift off from the family cave, south to Beck's Mill , and back into Salem's Square and many other points of interest before she headed home by way of Crown Hill Cemetery. Just as she's about to lower her broom for landing at the cave, her broom loses its power and Winifred manages to glide onto the driveway of a human neighbor. She discards the broom and hurries to the family cave as there are seconds away to dawn which is the magic minute she must be home. Winifred's broom is left on the driveway to be retrieved later. Does Winifred get her broom back? Have her Halloween plans been put on hold? Who finds Winifred's broom?