Sadness at Leaving - An Espionage Romance 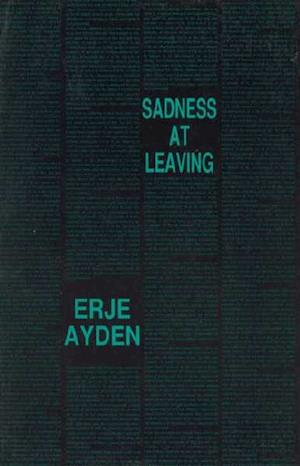 Pulp fiction writer Erje Ayden's coy novel is his most autobiographical work-if one accepts his claim that he worked as a spy for the Turkish government in the 1960s and 70s.I wonder if it is lustful A tank in its dreams What do airplanes think When left alone? We did not seek happiness We invented sadness Were we not of this world? -- Orhan Veli, epigram to Sadness at LeavingDuring the 1960s and 70s, Turkish-born Erje Ayden served as house pulp fiction writer to the New York School of painters and poets. Friend and sometime bodyguard to the artist Willem De Kooning, Ayden self-published 7 pop novels, written in rapid amphetamine bursts in borrowed apartments and rooming houses. Sadness at Leaving, re-published by Semiotext(e) in 1998, is Ayden's most autobiographical work -- if one accepts, as he claims, that he worked as a spy for the Turkish government throughout those years. East Berlin, 1959: Following the erection of the Berlin wall, special agent Carl Halman is assigned by East German intelligence to move to New York where he'll "sleep" as a writer until he is called. Using the code-name "April 23," Carl successfully infiltrates the uptown-downtown literary world in 1950s New York. He edits a magazine, follows the Knicks, and marries Melinda, the socialite wife of best-selling jock novelist Hubert Cleaver, Ayden's hilarious Norman Mailer pastiche. Through Carl's eyes, we see New York City change from an outpost of Europe to the new capital of an anarchistic, post-ideological world. But then, when Carl least expects it, he's called.